Gail – My Favorite by DeShavrr

I own and operate a cleaning service. I came home one morning very late and fell asleep on the couch. The phone woke me up so I answered it. On the phone was my favorite customer, Gail. She was my favorite because I loved her hair! Buzzed close on the sides and back, shaved on the neck. Gail was not the most beautiful woman I had ever met, but her hair made her sexy! We had known each other for about 4 years while I cleaned her office. I do business there and that’s why she was calling me. She said that there was a problem and asked me to come down to talk to her. When I arrived, Gail took me back to an inner office to talk with me. I really enjoy being with her, she is always so happy and up-beat. As we were talking, there was an awful sound like an earthquake and sonic-boom rolled into one! At that instant, the door slammed shut and we were thrown to the floor! In a couple of minutes everything calmed down, but we were locked in. Gail said that this was a safety precaution and it would open on its own in a while.

Well, a while turned into 3 days and when it opened we were totally astonished to find out that we were the only people left around! We couldn’t find anyone! We scavenged for food and found a comfortable place to stay to figure things out. After a couple of weeks, we realized that it might remain this way so we decided to stick together. We traveled a lot but couldn’t find anyone.

Electricity was still on so that was convenient. After a couple more weeks, we were sitting eating and just talking about different things. Gail had said how much she needed a haircut. She hated her hair to grow very much. It was a dream come true for me! How many times had I thought about cutting her hair! I told Gail that I would be happy to cut it and I wanted her to cut mine also. She said that she used to buzz her son’s hair for the summer. I said that was fine to me and off we went looking for a barbershop.

The one we found said “Nick’s Barbershop” on the front window. As we stepped inside, I told her that I would be first. She said O.K. and that she would do the best she could. As I sat in the chair, Gail snapped the cape around my neck and picked up a pair of black Oster clippers. She asked me how I wanted it. I told her to do the best that she could, anything would be fine. She told me that all she ever did before was super short buzz-cuts on her son. I said hey – that’s fine! She snapped the clippers to life and ran them up the side of my head. Hair was falling fast as she moved to the back of my head. Gail placed the clippers on my neck and ran them up to the top as my hair fell to the ground. When she finished, my hair was about 3/8 inch long all over! I was so excited, I hadn’t been clipped like that since I was a kid! I told her it looked great and that it was now her turn.

Gail sat down in the barber chair and I snapped the cape around her neck. I asked her how she wanted it and much to my surprise she told me that she secretly always wanted a crewcut! I wasted no time and changed the blades on the Oster clippers to a 000 blade and turned them on. I could tell that she was going to enjoy this as I put my hand on her head and pushed her chin down to her chest and held it there. I placed the humming clippers on her neck and ran them up to the top of her head to reveal white scalp. I kept doing this until the back of her head was completely clipper shaved! I did the same thing to both sides of her head, then changed the blades to a no.1 blade and started on the top of her head! I started at her forehead and ran the clippers back over her head to the back. Hair was falling all over her as she smiled. The clippers took her hair down to about 1/8 inch! I finished by shaving her neck and she said that she loved the feel of it!

We went to get something to eat and I couldn’t quit looking at her! Her head was so beautiful! We then went to sleep and I was awoken by the telephone ringing. As I answered it, I realized that it was Gail and I just had the greatest dream that I had ever had! 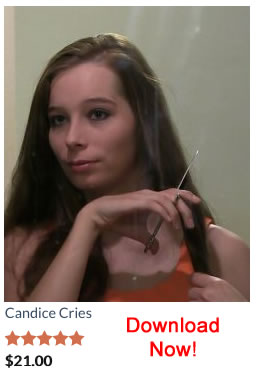