The women of the anti-fur coalition were just wrapping up their protest of a posh Beverly Hill’s store when Playmate of the Year Victoria Silvestedt happened to walk up… wearing a full length mink coat! She immediately flew into a tirade on how these women needed to ‘get a life’ and ‘grow up and stop pestering women such as herself’. Few passers-by paid any attention, as everyone had been ignoring the group all day. The four stunned women, appalled by Victoria’s behavior, knew they had to act fast. A lucky coincidence occurred just then, as the van coming to pick them up pulled up. Victoria was standing with her back to the door as it opened. The girls looked around and quickly shoved her inside. None of them had any idea what they were going to do with this prized beauty… only that that they knew they now had one of the top women they’d been railing against. She was as surprised as they were at the sudden turn of events!

“Damn it! What the fuck do you think you’re doing? Stop this van immediately! Don’t you know who I am?” Victoria screamed as they sped off into the Hollywood Hills.

“Someone put a sock in her pretty mouth ’til we figure out what we’re gonna do with her!” said the older woman behind the wheel. Victoria was gagged and her fur coat was removed. “What the fuck do you need a coat for anyway? This is L.A. and it’s SUMMER!”

After a half-hour drive, they pulled off the main road and proceeded back to an old ranch house. Victoria, now bound hand to foot and gagged, emitted muffled screams and pleas to unsympathetic ears. She was carried out of the van and over to a well-lit barn. She watched in horror as they dug a hole and buried her fur coat. She couldn’t believe it.

“Go ahead and take the gag off. If she starts screaming, we’ll just put it back on,” said Shannon. The rest of her binds would stay put for the time being.

“Are you people out of your minds? Do you have any idea how much it’ll cost to replace that coat? UHHHHN! UNTIE ME, YOU STUPID BITCHES!” Victoria babbled on and on about the cost of her fur coat. Not the best route she could have taken, considering her present company.

“Well, well… looks like we got us a new spokes-model!” Amy smiled. “Get her out of that flimsy dress.”

Victoria squirmed around, futilely trying to stop the two women who were delightedly stripping her. Soon she was sitting bare-ass naked with her breasts pressed tightly against her knees.

“What is it you super-model-sluts like to say? I’d rather go naked than wear fur? I, personally, find that ad campaign to be a load of crap… but obviously, it doesn’t apply to you… does it?” Amy said with a hint of sarcasm.

“…please don’t hurt me…” Victoria whimpered, seemingly humbled by the removal of her clothes. She was then lectured for hours on the inhumane treatment of the animals that yielded her precious fur coat. They got the idea that none of this was sinking in when she finally asked “…but are you going to pay for it? It was really expensive.” The women just looked at each other in disbelief.

They toyed with the idea of releasing her nude, but since she’d already done that in a national magazine, that didn’t make much sense. Besides, they figured she’d just get off on it. Finally, Andrea came up with a fitting solution. “I’ll be right back!” she said, running over to the house.

When she returned, she had a huge smile and something behind her back. “Since this lady finds fur so appealing, why don’t we take hers?” she giggled.

Victoria was confused. “What? You already did! I watched you bury it!” she said.

“Not that fur, honey…” Andrea replied pulling out an electric shaver.

“…oh my god NO!” Victoria said with widened eyes. “PLEASE! You…you can’t cut my hair! Not that!” She tossed her platinum blonde locks from side to side.

Victoria started to scream but they quickly slapped a piece of tape over her mouth. Her eyes grew wide with fear as the buzzing shears closed in on her forehead. “Take this, you SLUT!” Andrea said as she planted the clippers at the trembling beauty’s hairline and mowed a two-inch wide path over the top of her head and back to her neck! A pillowcase caught the rapidly falling locks. With each pass their satisfaction (not to mention their amusement) grew.

Before long, Victoria’s glorious mane had been reduced to mere nubs. For all practical purposes, she looked like she was bald. But she wasn’t bald enough for these people! They weren’t done with her, though.

“She looks like the world’s sexiest plucked chicken!” Amy commented. Victoria sobbed quietly, but constantly reassured herself ‘it’ll grow back’. Then Andrea got her ready for part two. She cut the binds that secured Victoria’s feet and instructed Amy and Shannon to hold her up with her legs spread wide. She just moaned, knowing what they had in store. “That’s right, bitch… it ALL comes off!” Victoria squirmed a little and tried to scream as Andrea quickly buzzed off her blonde public hair. “You have a huge cunt for a Playmate. No wonder they air-brush all that off!” Andrea said as she briefly groped the newly shorn pussy in front of her.

“Now for the final part of your little makeover!” Andrea announced as she produced a black gym bag. Victoria’s eyes filled with tears once again, as its contents were dumped before her. On the ground lay at least a dozen different types of hair remover! Some reporting to ‘remove unwanted hair permanently’! Used in such a massive combination, the results were practically guaranteed! “We’ll see if you feel the same way about fur when you can no longer grow any!” Amy laughed as they all put on rubber gloves and began the rub down of Victoria’s bristly scalp. Not even her eyebrows were spared! Layer after layer of foul-smelling liquid was applied. Her head tingled and burned as they wiped away the last remainder of her once luxurious tresses. 20 minutes later, they took a wet towel and wiped it all off while Shannon gave Victoria’s pussy a similar treatment. “Perfect!” Andrea said with sadistic glee. The Playmate of the Year was now slick bald-headed!

“No more bad hair days for you, Chrome Dome! EVER!”

“I have a feeling you’d rather keep your new ‘do ‘Victoia’s secret’, wouldn’t you?”

They taunted and teased the billiard-ball-headed model and each had their picture taken with her. When the tape was removed from her mouth, Victoria had nothing to say. She was cleaned up and made to pose for hundreds of new photos! She complied without argument.

Finally, Andrea came up with one more indignity. “This’ll be great for our new ad campaign!” she said as she pulled out a marker. Victoria was made to kneel before her as the woman scrawled a message onto her shiny hairless head. They all laughed when they saw what she’d written, though it would be weeks before Victoria knew what it said. She was stood up for more pictures, after which, her head was scrubbed and cleaned and she was led back out to the van with a towel wrapped around her.

They released her right where they found her, yanking off the towel as she went out the door! Butt naked and bald, Victoria ran screaming to her apartment four blocks away! It was a slow night, so only two paparazzi managed to get pictures of her hairless nude flight!

Two weeks later, she found out what it was that they’d written across her scalp. Several billboards began springing up over night showing Victoria in all her bald glory! Across her naked head were the words “I’m Victoria Silvestedt and I’d rather go BALD than wear fur!” If there had been ANY hope of keeping this secret, it was gone! 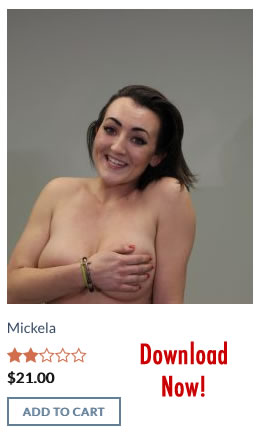